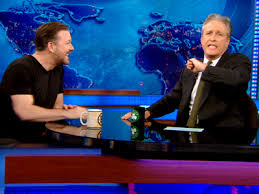 On The Daily Show April 17th, Ricky Gervais announced that he has started the Ricky Gervais Channel on YouTube. Jon Stewart seemed somewhat surprised that such an enormously gifted talent as Gervais would throw down with the idiocy of cats getting sprayed with coke and Ricky’s answer was that he would sign that cat up and take 90% of his earnings.

Some of my favorite clips on Ricky’s YouTube channel are the pilot titled “Ricky Gervais Teaches English” and the “Idiot Abroad” series where Ricky and friends seem to relentlessly pick on their friend and straight man Karl. Ricky offers pilots and gets feedback on them from his audience which replaces the old, expensive and time-consuming process of playing bits in front of live audiences to craft and hone content such as was the creative process of many film makers and comedians, like the Marx Brothers for instance. He is completely in control of the content so he can take feedback directly from his audience and change or discontinue as he chooses without contracts or movie studios getting in the way.

But the thing I found most hilarious and intriguing is that Ricky also talked about his Twitter Feed. Like myself, I have heard a lot of classmates express confusion about how to use Twitter as an element of a successful social media campaign. Ricky is a master. He often turns Twitter in on itself as a tool to analyze and comment on the social media and the people that use it. For example, he offered to donate 10,000 pounds to a charity if no one re-tweeted his offer. Thousands of people re-tweeted. He clarified to NOT re-tweet and again, thousands of people re-tweeted his offer of charity.  “Do you really think I have to think about a Tweet?” Gervais asked. He pulled this stunt in the car on his way to The Daily Show.

He often re-tweets his followers- especially the hecklers who did not fully think about what they were tweeting. It is the easiest comedy writing that ever was- he has abundant content without writing a word himself! Everything is free, engaging and entertaining. And at the same time, he is linking to Australian reviews of his new  film, Derek. Sounds like Gervais has taken some points from Meerman Scott. Did I mention that there are also links to Ricky’s Web page and Blog? It’s a social media 360 and a really good example to all of us of how one man has used social media to create interest and engagement, entertain, and above all, promote himself in a way that makes us want to observe and participate.

Since an element of truth is the essence of quality humor, comedians often make the best teachers. I signed up to follow Ricky on Twitter not only because I know he’ll make me laugh. I know that his pranks, re-tweets and interaction with his followers will give me valuable insight into social media- and we’ll have lots of fun along the way.