Nowadays everything is on the internet. News, music, along with the music videos, movies, television shows, and so much more.

Something I think that has changed a lot now from when I was younger is how I watch movies and the latest television shows.

My family used to go to the movie rental down the street and rent the latest movies and bring it back home for the weekend. Every time we went I would choose the same movie just to bring home and watch it from beginning to end, rewind it and watch it again beginning to end until it was time to return it to the video rental store.

When there was a T.V. series that I got really into, I would have to make sure that I was at home on that night of the week that it aired every week, at the exact time or I would miss the episode. If I did miss the episode, who knows when they were going to run it again.

I rarely watch the actual television set now. First being, all my favorite movies that I own are VHS, and I don’t have a VHS player anymore. Yeah, there are DVDs but that brings me to my second point, I rarely even buy DVDs anymore. Like how I rarely buy the latest CD albums when I can just listen to it on YouTube or Spotify when the album drops. The third is the wonderful internet, a very awesomely fun and dangerous place.

Now I watch my old and new favorites, whether it being movie or T.V. series on my laptop with Netflix or Hulu.

Both have T.V. series, movies, and now even original content. They do come at a cost and I do pay that cost.

Netflix has three plans to choose from. 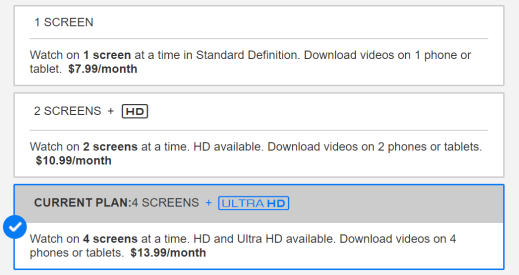 If it is just, you the first plan for 1 screen is not bad. However, the second plan has 2 screens and high definition quality. You can watch at home and on your phone on the go. Plan four, as you can see is the plan I have.

Netflix has lower quality with bad connection even if you pay for the HD. They have T.V. series but they don’t update to the newest ones until the entire season is done. Their international selection is larger. And, no commercials!

Now I don’t have either plan. My Hulu subscription is $4.99 a month in a bundle plan with Spotify premium, which I mention about in another blog post.

Hulu’s overall quality is pretty good, not Ultra HD but more like a higher standard definition. The newest episodes of T.V. series update right away. They’re always adding more movies to their site. A downside, there is an additional cost for some networks like HBO, Showtime, and Cinemax. Much like cable has. Hulu has commercial breaks with the T.V. shows but none with the movies.

Both websites have great selections and half of them are not offered on the other and they have their pros and cons.

Concluding this all, I’m not going to tell you which one to choose. I’m just giving you a look at something past cable.