A new partnership receives major backlash, criticism and threats of a boycott. The ad  “Dream Crazy” is Nike’s latest campaign honoring the 30th Anniversary of their classic “Just Do It” slogan. This week Nike revealed that they would be using Colin Kaepernick, former N.F.L player, as the face of their campaign. 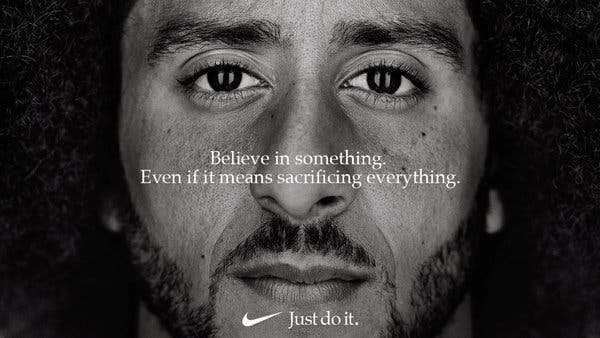 Most public companies veer away from taking stances on political issues to avoid making their customers angry, but Nike has been known to use controversial marketing strategies in the past. They’ve signed a contract with Kaepernick despite the political discourse surrounding his name and image.

Colin Kaepernick began kneeling during the N.F.L’s national anthem in 2016 to protest social injustice, police brutality, and racism. This led to more N.F.L players to join this non-verbal protest by kneeling, linking arms, and putting the black power fist up during the national anthem. The peaceful protests have been misconstrued into being disrespect to the American flag, veterans, and military.

By Nike taking using this strategy, they’re risking losing customers who believe that Kaepernick’s protests are disrespectful. In a matter of just a few hours of Kaepernick posting a tweet announcing the partnership, there were millions of responses on social media.

“On Twitter, more than 100,000 posts in the first 24 hours included the hashtag #BoycottNike, but the firm’s analysis showed “more support for Nike and Kaepernick than we see negative actions taken against them,” said Jason Klein, co-chief executive of ListenFirst. The campaign, which was announced with a simple tweet by Mr. Kaepernick, has also generated at least $43 million in free advertising for Nike, according to one estimate.”

People have been cutting the Nike swooshes of their apparel, burning their shoes, and calling for a boycott of the brand itself. In response to the negativity, people created posts calling for these boy-cotters’ to donate their Nike items to the veterans in need, to apply their energy towards the social issues at hand, etc.

Nike released the commercial that included Kaepernick, Serena Williams, Lebron James and other famous athletes. The commercial did not display or reference “taking a knee” , it mostly was it’s traditional “Just Do It” stance.

The blow up has even caught the attention of our President. He tweeted

“Just like the NFL, whose ratings have gone WAY DOWN, Nike is getting absolutely killed with anger and boycotts. I wonder if they had any idea that it would be this way? As far as the NFL is concerned, I just find it hard to watch, and always will, until they stand for the FLAG!”

In reality Nike has gotten $43 million worth media exposure in these couple of days, and their stock shares have not been greatly affected as of yet. I think they can dock this as a #WIN  so far.

To support or boycott? That is the question…