Have you ever made a bet with your friend or significant other that was a win-win situation? Probably not—more like a win-lose situation. It’s okay. That is why in today’s post I would like to tell you about a win-win opportunity but with a charitable twist. It’s pretty neat app, called: Budge and you can create challenges about almost anything with your friends for great causes such as cures for cancer, Alzheimer’s disease, AIDS, or understanding climate change, or searching for extra-terrestrial life. I first saw this app on Buzzfeed: 25 Free Apps That Are Making The World A Better Place.

“Budge was born out of our vision that giving to charity should be a fun and super easy process,” said Hillan Klein, CEO and co-founder, Budge. “With this goal in mind, we set out to build a new culture in charitable giving specifically aimed at Gen Y by combining social gaming with micro-donations. We want to educate people that it’s okay to give in small amounts–casual deeds can truly have a meaningful impact.”

What has been usually done in the past is that the leaders of charities set up a table to have you sign and make a donation that way or hold special events that promote support by donations and then people can pay to enter the event. But I feel like by using those techniques to reach the charitable goal can somewhat take forever to reach because most people are going through a “Charity Fatigue”. In which, many but not all feel like that charity can be a bit too much and just feels sometimes forced. But with the Budge app, it feels less forced because you are donating money in a enjoyable way. Just like it states on the Cision website, “From there, it takes only a few seconds to create a “budge,” select a charity and challenge their friends. “Budges” can be anything – a game of chess, meeting for coffee, a pizza-eating contest, you name it.”

Now, before you think or say that donating to charities can be a pain at times, especially for the reason that they usually require commitment and emotions run high as well as leave the wallet somewhat dry. I came across an app that includes fun ways to give to charity by interacting with friends with cool challenges. I can remember when donating was not as fun, specially when it came to church charities or food drives. 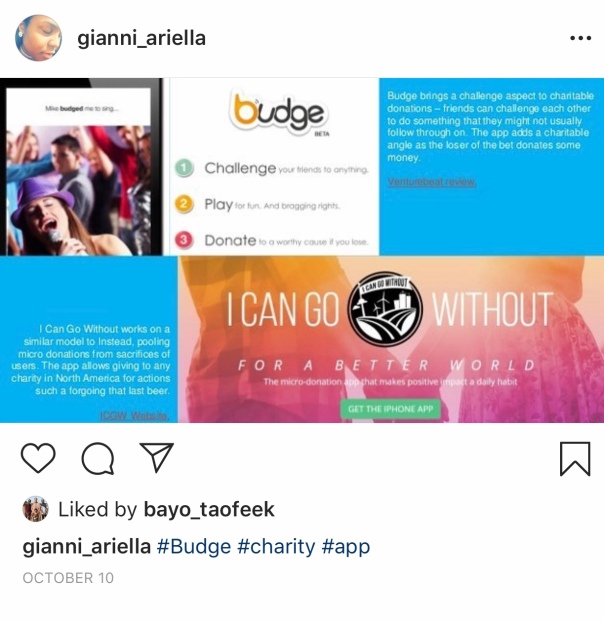 I have used this app before with a couple of my friends and for one challenge I can recall is that we put in the challenge of not eating unhealthy foods and to drink plenty of water for 1 week or so, in which I won with another friend but the other friend lost. But we enjoyed it, because who really doesn’t like a challenge?