I will preface this by saying I am not well-researched in the areas of politics, national financing, or whatever actually goes into this mess, in the United States or elsewhere.

But I think it might be worth mentioning my thoughts on a few things, based on personal experiences, and some things I’ve heard that just… don’t make a lot of sense.

The word “tax” in itself has come to have largely negative connotations–if you’re being “taxed” by something, you’re being weighed down or put upon. We have classic examples of people, like the Sheriff of Nottingham from the Robin Hood stories, who abuse taxes.

In a truly ironic state of affairs, my dad is adamantly against any kind of raise in taxes, but he also works for the state of Minnesota, and part of our taxes are what pay his own wages.

But if taxes are being abused, for things like… oh, say, a giant wall, or a football stadium… then, yeah, I wholeheartedly understand the aversion.

I don’t think anyone is ever entirely sure what taxes are used for, but there’s obviously some mismanagement going on somewhere, and that’s the bad thing. Taxes themselves? They have some truly positive possibilities.

Some people are really put out by the thought of providing for others. Which… I get, to some extent. At the moment, it’s hard to fathom providing for myself, let alone anyone else in the country–but that’s because a lot of things in “the system” are broken. They’re not being used the way they should.

If I had the peace of mind that came with guaranteed good health, the basic ability to learn the things I need to know without being in debt for the foreseeable future, and the reassurance that life as we know it wasn’t on its way to being toasted out of the Earth like a bad virus, I would happily give away a third or more of my income for the rest of my life.

In a perfect world, what would your taxes be used for?

What would you be willing to provide, to make your own life and the lives of others easier?

The Brooklyn Art Library, “a free museum where you can touch the art,” regularly offers a really cool opportunity, called the Sketchbook Project.

On a whim, I decided to participate in vol. 14. The process goes like this: purchase a sketchbook (a modest 5″x7″, my favorite size), and choose whether you would like your sketchbook to be included in the digital library (of course, yes, please). Receive your adorable, simple, blank sketchbook in the mail. Do something. Send it back by the deadline.

You can send your sketchbook back later than the deadline (vol. 14 needed to be postmarked by March 30th), but collections of the latest volume usually go on tour somewhere before arriving at their forever home in Brooklyn. Late arrivals will still be accepted at the Library, but will miss out on the tour portion of the project. Selections from the vol. 14 collection are going to cities around the U.S., including Brooklyn (of course), Boston, Providence, St. Petersburg, Washington D.C., Richmond, San Francisco, and Los Angeles.

Part of my motivation for participating in this project was marketing. I’m trying to pursue several blogs and other ideas, and I thought this would be a really interesting way to (potentially) draw some attention to those prospects.

But it ended up being something very different.

It became more a form of therapy than anything. When I opened it, I was faced with blank pages, and the fear of messing up, of people seeing the opposite of what I wanted. I was afraid that my ideas weren’t interesting enough, or that my art wouldn’t be good enough. I was afraid that I was going to end up wasting my time and embarrassing myself.

I didn’t know how to start, but I had to do something with this book while I had it. So I did what I’ve been doing pretty much nonstop for the last four years: I started writing. Now, I hadn’t actually written consistently by hand for a long time. It had been even longer since I had written words in pencil–something smudgy and impermanent and so forgiving. I wrote before I went to sleep, random thoughts floating around in my tired brain.

The first page was unfortunate. It was clogged with anxiety and insecurities. But, as I went along, the pages became more optimistic, more reflective, more abstract. I added color, changed up the style and direction of the text. I sketched.

And then something amazing happened.

“Through the Mists” throws my and my partner’s old live-action role play characters into alternate universes, for new and exciting adventures. 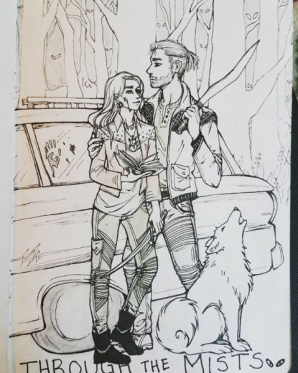 “York” and “Talitha” in a Supernatural-esque world (with his dog, and a snazzy 1962 Ford Falcon station wagon).

Concept/cover art for a “Monster of the Week” style RPG and potential episodic podcast, now titled “What Lies Beyond”.

I completed the first full, inked composition I had done, probably since 2012 (seven years ago!) when I was at the Perpich Arts High School. I wasn’t entirely sure that I still had the know-how–but then it worked. I created another, and another.

I posted pictures of my work to a group on Facebook and got the very unambiguous reply: “do more of this.”

Through the process of letting go and allowing myself the time and space to just do art, I rediscovered some of the self-confidence I had lost, and improved my immediate outlook on life. It was a little sad to part with the sketchbook, but I’m excited to see it again in the digital library, and for people to look at it and touch it and think about it in-person, across the country.

Toward the end of the time I had left to work on it, I traced my hand on an open page. I hope that many more people will place their hands in that outline. Maybe the page will yellow with their fingerprints.

I may have to go to New York someday to find out.

If you want to explore your own process, and share something of yourself with the world, vol. 15 is now available. 🙂

As a creator and consumer of the arts, I recently took a trip to the Walker Art Center in Minneapolis with a friend to see some new exhibits. It’s been awhile since I visited a museum and was pleased to see so much variety in the exhibits and art disciplines, which led to my friend and I having a casual conversation about the age-old question, “What is art?”

People have been asking this question for hundreds of years. And despite the fact that the definition can be narrower or broader depending on the respondent, today there are multitudes of artistic disciplines: some are carryovers from our ancient past, such as pottery and painting, and others are newer forms like electronic music and digital video.

Following the trip to the Walker, I went online to see how others are defining the term “art”, and I came across a recent blog on Huffington Post, where the author examines the meaning of “art” from the perspective of various people.

One of the responses that caught my attention was by theater director, Ana Mendelson. In the blog she states:

To me, Art is at its core inclusive. It’s inclusive in form, topic, and, hopefully, in creators and audience. Because art can be anything we want it to be, be about anything we want it to be, and be done for and by anyone, arts at its highest form brings people together and helps us reflect on our own humanity. Through art we can honor what makes us unique and celebrate what makes us all one.

Similar to Ms. Mendelson’s definition, I also see the value art has in bringing people together and its power to positively transform communities.  This definition had me thinking deeper about the question of art, and my current work of leveraging arts for better social equity.

Social justice and equity are not new concepts and have been around since the days of Plato. We generally think of social justice as a fair and equal relationship among members of a community or society. To learn more about social justice and equity, a simple history and explanation of “social justice” is provided in a blog post by The Pachamama Alliance – an organization whose mission is to reach out to the public and inform them of these social inequality issues that plague the globe. 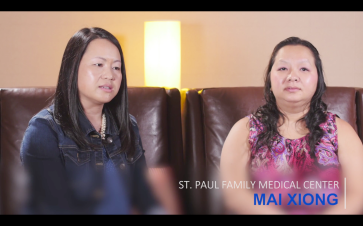 As a professional filmmaker, media producer, and artist, I have evolved my skills to adapt them for social good and today I apply them in a non-profit setting to help under-served communities and disadvantaged community members. Many of my organization’s programs and projects focus on social justice issues: health equity, arts and cultural access, educational equity, equitable community development, etc. However, our unique methodology is to think about and develop solutions through the arts and culture.

For example, we recently worked on a project with the Minnesota Department of Health and its Center for Health Equity to document and share health equity stories from around the state.  We used storytelling, video production and other art skills to accomplish this work.  One of goals of the project was to help state and community health worker work towards better health equity outcomes. The use of art tools was a successful strategy to engage more people and policies around health equity in Minnesota.

So how to I define art today?

For me, art has always been is a useful tool: a tool for communication, reflection, entertainment, and promotion. But today, I also include art as a tool and vehicle to address and solve social equity issues in our community, which is a way of thinking about art that has expanded my definition of the word.

How do you define art today?

Last March, you might have heard that Lady Gaga’s performance at the South By Southwest Music Festival (SXSW) included her getting puked on by professional vomit artist Millie Brown during the song “Swine” from the most recent album, “ArtPop.”

I mean, yeah. My little sister posted the video on my Facebook and after watching it, I immediately deleted it from my page and memory.

Demi Lovato was perhaps the loudest critic, posting a Tweet saying “Sad… As if we didn’t have enough people glamorizing eat disorders already. 😦 Bottom line, it’s not “cool” or “artsy” at all.”

TMZ posted a video and a few sentences about it, calling Gaga’s “antics” “sick” and “ridiculous.”

But have you heard the song? It is disgusting. The voice in the song is disgusted by herself, by who she is referring to, and the whole story the lyrics tell. Gaga is singing about feeling vile and violated:

So the world was horrified, not for the first time, at this craaaaaaaaazy thing Gaga did. (Even I was a little offput, but for me it was the first time.)

Then as I blasted the song in my car for the millionth time, and as I felt disgusting, and I got it. What’s going to make you feel nastier than getting puked on? Giving your body over to someones raging lust is disgusting. Vile. Offensive.

The puke was perfect.

Is art not symbolic? Is it not meant to evoke strong feelings? Is it confusing and controversial at times? Misread? But that’s okay- that’s the point of art: that it is up for interpretation.

(Read about how Gaga defended herself after the public uproar)