Let’s talk Double Standards. By definition a double standard is a rule or principle which is unfairly applied in different ways to different people or groups. That is a pretty straight forward concept. We have all heard the phrase “what is good for the goose, should be good for the gander.” Well that means that both the male and the female of the species should be treated the same. We all know that isn’t the case in many of life’s little scenarios, but let’s just focus on one to keep the conversation simple… SPORTS.

Olympic Committee Guidelines have to be the most detailed, ordered, strict and contested set of rules on the planet. There is a rule for EVERYTHING! One thing is pretty clear though, taking performance enhancing drugs is a pretty big no no. This is called doping. You can’t put anything synthetic in your body that might give you an edge over another competitor. It is kind of a no brainer. But what if you were born with more of one chemical or less of another in your body that gives you an edge? Should you be required to suppress it or increase it chemically in order to put you in line with your competitors? Well let me pose this question ….

Why is Caster Semenya being asked to suppress her NATURALLY produced testosterone, when Michael Phelps isn’t being asked to increase his NATURAL lack of lactic acid?

Yes I realize this is not a perfect example due to the fact that lactic acid isn’t considered a performance enhancing drug in the world of sports, nor is the lack of it a dis-qualifier. However, the fact that it has been scientifically proven that his body produces only half the lactic acid that his rivals need to handle, he is at a place of advantage due to his specific genetics. So… if you are gonna call out one, you gotta call out the other. Or better yet… just let them BOTH COMPETE AS THEY ARE! Quit trying to dictate and control what women’s bodies should conform to.

Why don’t people care more about women’s sports? If you know a girl or woman who has played a sport, and you have followed their progress possibly into a college, semipro or professional career you are probably well versed on what social media platforms and what obscure cable networks to tune into to keep up to date. However, the average Jane or Joe hasn’t got a clue that 90% of the women’s sports clubs even exist let alone know that they could follow them, or even watch them on the boob tube! Here is the problem. Women’s sports don’t even get their schedules posted on local news networks, so it is a completely ignored market. Boys High School Prep Sports fill the gaps in air time between men’s league seasons, so women Pro teams don’t even get a shot when they play during the off seasons of mainstream men’s leagues.

“A 20-year study of network and cable by USC & Purdue sociologists find men take 96% of sports news in 2009. Even the ESPN Ticker gives women the short shrift – 96.4 percent of the information scrolling along the bottom of the screen was dedicated to only men’s sports.” The finding is part of a 20-year study of sports coverage released today by University of Southern California sociologist Mike Messner and Purdue University sociologist Cheryl Cooky.

In 2010, ESPN seemingly in response to the research mentioned above, thought they had a good answer… they launched espnW… a digital presence for women, where its all-women’s sports all the time. In theory it is a wonderful idea, and if it was only “the thought that counts” they would have won a trophy for their effort. Here is the problem, it keeps women’s sports out of the mainstream media, away from the mass public that are the primary consumers of sport. If the only ones that are going to look at your website are the ones that already know you are there your numbers are NEVER going to grow organically.

If women’s sports were given just a fraction of the airtime that men receive the difference it would make for women’s clubs would be phenomenal. Instead we not only have every men’s game imaginable available to us, all year round, we get talking heads analyzing every fart and jersey movement of every player on and off the field and how it is going to affect their multi-million-dollar deal. You have to do an extensive internet digging expedition to find highlights of the Women’s World Cup Soccer Match, but you can’t stop seeing every run, score, touchdown or goal from every men’s or boys’ game that happened be playing that night before.

Women play sports for the love of the game, not the money or the fame or the glory. (OBVIOUSLY!) We are just starting to see some progress when in comes too equal pay for women in sports since the USWNT sued US Soccer for gender discrimination beginning as far back as 2016 (which is still an ongoing court battle). However if you look at how many women and girls play sports at club, HS, college and even Pro levels and never see a dime in compensation for their commitment to the sport; when you compare that to the men… its decidedly lopsided and unfair.
https://www.nytimes.com/2019/03/08/sports/womens-soccer-team-lawsuit-gender-discrimination.html

Just as a point of interest Minnesota a a LEADER and Innovator in Women’s Sports. Out of the 4 Major Professional Women’s Sports Leagues Minnesota has a team in all but one and has been championship quality in all of those 3. Basketball there’s the WNBA ~ Minnesota Lynx, Hockey its the NWHL ~ Minnesota Whitecaps, Yes even 100% Full Contact Women’s Football there’s the WFA ~ Minnesota Vixen, and then if you like European football … or Soccer there is NWSL we don’t have a team here yet but with a brand new stadium and a strong soccer following for the Men’s team the MN United… I’ve got my fingers crossed!

Feminism: the advocacy of women’s rights on the basis of the equality of the sexes.

This seems like a simple enough concept yet in many circles the word feminism has become a dirty word. I have read articles that use it as a derogatory term, that have claimed feminism has been the downfall of western civilization, and that have accused feminists of hating men. I have read women claim to not be feminists because they want to stay home with their children, as if feminism means all women have to work and put their kids in daycare. That isn’t what it means. It very simply means that they should have the choice to stay at home or to enter the workforce and that if they do enter the workforce, they should have equality in pay and opportunities for promotion. Inequalities in the United States are not as pervasive as they are in some parts of the world, but they still persist. Below shows the pay gap by state as of 2016. 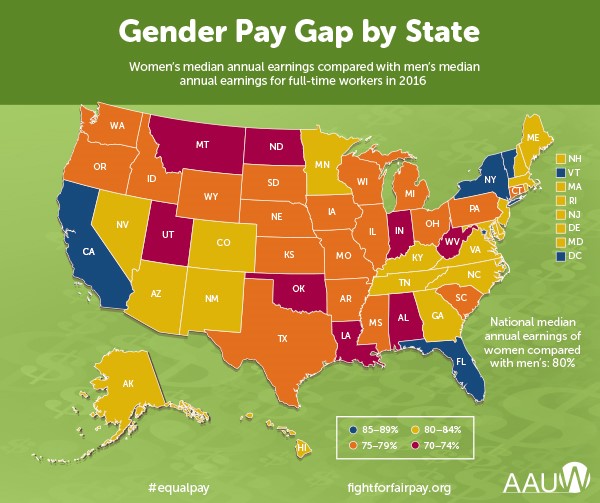