President Donald Trump on Thursday said he was “bringing out the military” to cease people of Hispanic origin from crossing the southern border into the U.S. He wants to declare a state of national emergency and in my opinion, I do not agree with this. According to the Merriam Webster Dictionary, the definition of national emergency is a “state of emergency resulting from a danger or threat of danger to a nation from foreign or domestic sources and usually declared to be in existence by a governmental authority.” He makes it seem like we are in immediate danger for allowing more people in this country that would not just like to better their own lives but as well as their families lives and I find this to be quite disturbing. This is disturbing due to the fact that he wants a ban for some countries but allows people from other countries to travel freely to and from the U.S. or give them a pass, so to speak. 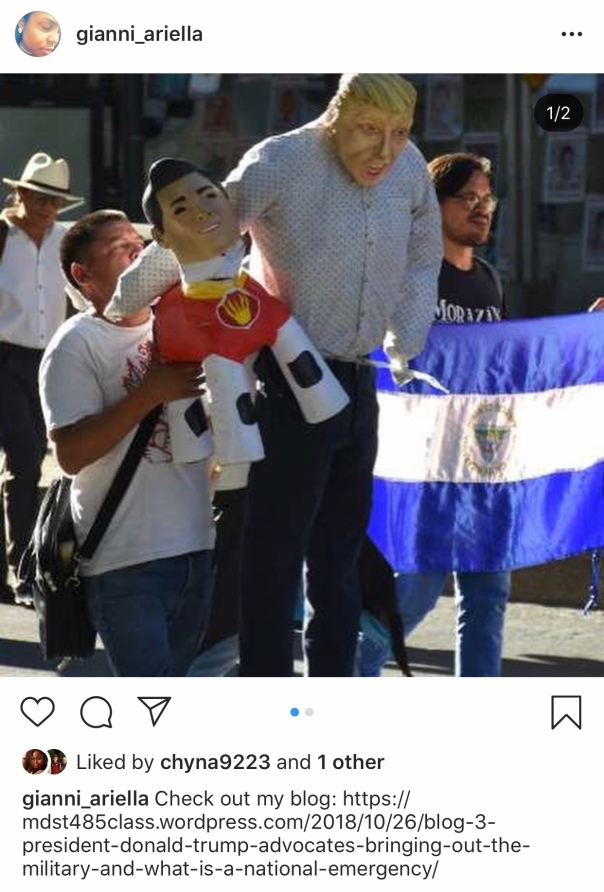 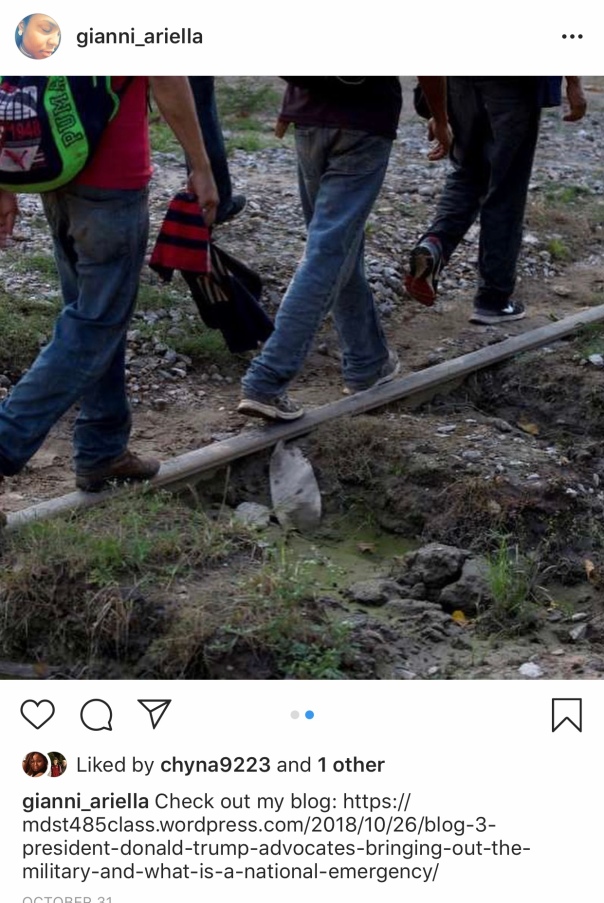 Trump had earlier this week repeatedly said he had put the military on notice for such an action, but his comment Thursday seemed to have a backlash. Does he not know that his comments and phrases have public repercussions?  I mean, its fine to voice your own opinions but everyone should have to say in the matter of whether this would be the right thing to do for not just the American people but also for others from different countries.

The president had stated a promise in a morning tweet that he made mentions of comments made by Brandon Judd, the president of the National Border Patrol Council, on “Fox and Friends.” Judd, a recurrent guest on Fox News Channel, is the union representative for about 16,000 border patrol agents.

“Brandon Judd of the National Border Patrol Council is right when he says on @foxandfriends that the Democrat inspired laws make it tough for us to stop people at the Border,” Trump tweeted.

Trump included, “MUST BE CHANDED, but I am bringing out the military for this National Emergency. They will be stopped!” he added, appearing to misspell “changed.” I feel like if you are going to state something that you feel strongly about such as illegal border crossing, please Trump make sure to proofread real quick or have someone in your office do it for you. I mean, Condoleezza Rice did the same for Bush when he was in office.

Trump has tweeted often in recent days about illegal immigration and the migrant caravan traveling north through Mexico. In which, I think that there is nothing wrong with this, because whose elder relatives from another country was not shuttled here, either by boat, plane or bus to travel together to reach this already great country?

He had said on Wednesday night at a rally in Wisconsin that the U.S. would have a “very secure border” and that the “military are ready” to help in securing it. I have no idea if he will actually put the things he commented on into action but if he does we as a people of the United States definitely let him get that far and should not completely blame him.

To add on to his claim, on Monday, Trump had tweeted, without evidence, that, “Criminals and unknown Middle Easterners are mixed in” in the caravan and that he had “alerted Border Patrol and Military that” it was a national emergency.

Trump later admitted he had “no proof,” to support the claim:(

The public issue I would like to address is the detaining of illegal immigrants by local law enforcement. The immigration problem is more of a situation rather than an issue, the way most US citizens view our immigrants is disgusting. People have a strong feeling that these immigrants are stealing our jobs, and are promoting our crime rates. I see it to be very hypocritical that US citizens see our immigrants this way because most of our great-grandparents, grandparents, even parents aren’t originally from here. It appears that the US is okay with immigrants, but god forbid they are a couple of shades darker in their skin tone. This whole country was based on immigrants, so I am lost for words as to why the immigrants that we have coming now aren’t being socially accepted.

Yes, some of these immigrants might be up to no good, but so are everyday US citizens, there are going to be bad seeds on every surface of this planet, Immigrant does NOT equal criminal. These people work hard just like us, in some cases harder, and shouldn’t be transferred to federal immigration authorities due to minor crimes. Administer a punishment, but do not deport. These people have families, kids, and responsibilities that they need to take care of, one minor mistake shouldn’t dictate if they get to see their family ever again. If anything, this would be creating more damage than it being a productive tactic.

Everyone is entitled to their own opinion, but I feel that the people that are in favor of local law enforcement to be able to detain immigrants and transfer them to federal immigration authorities don’t quite have a good grasp as to how severe that consequence is, OR that they aren’t mindful as to how less fortunate people’s situations are on a day to day basis. I provided some results from isidewith.com to show you how the public views this issue. It grosses me out how many people are for this (more than half).
US Results: