If you are in the professional world you’ve likely been invited to, attended, participated in, or at the very least heard of a conference related to your industry. I work in education and our high-level district staff and board members attend a conference every year that gathers people together from large, urban districts around the country to share ideas and best practices. Conferences are great opportunities to network but are often out of reach for small businesses, non-profits, or individuals due to the cost of attendance.

END_OF_DOCUMENT_TOKEN_TO_BE_REPLACED 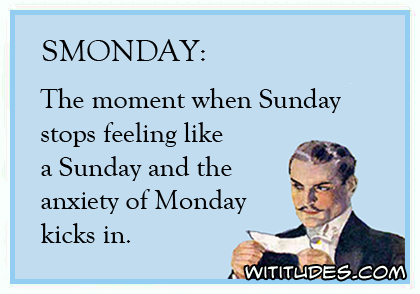 I think it’s fair to say that the above meme expresses a universal feeling.  At least one time or another, if not every single sunday, of every single week, we’ve all felt this exact feeling.  And I don’t know about you, but some smonday’s, it can get pretty dark and depressing.

So, what can we do about it? We must choose to look at Monday differently.  If we want something different, to feel something different, we must DO something different. Easier said than done for sure, BUT, we are the only ones who can do it.  I think sometimes we need to be reminded that we can’t wait for someone else to help change our ways of thinking or of doing.  With that being said, lets get some ideas moving in our heads so we can start thinking different and changing the definition of “Smonday’s:”

Life is hard enough.  The last thing we should be doing is creating anxiety, negative thoughts about things that haven’t even happened yet.  We as humans are wired to worry about what has already happened to us and what has yet to happen to us, instead of living in the N O W.  It’s time.  Let’s focus on the now, while we prepare the what is to come.

‘Can Henry Make It’ and ‘Henry’s Best Christmas’ introduce young readers to the world’s most inspirational and heart-warming Kiwi bird. While Henry cannot fly like the other birds on his island, his steadfast ability to overcome external pressures and stereotypes teaches an invaluable lesson to children about realizing their own potential. With a Christmas book also just hitting the market, Henry and his good character are poised to resonate with children around the world.

Maple Grove, MN – While most adults appreciate that diversity really is the true spice of life, being ‘different’ as a child can have a profound effect on confidence. However, a whimsical yet vitally-important new series of children’s book by Darion Harding is helping young readers relish and embrace everything that makes them unique.

‘Can Henry make It’ and ‘Henry’s Best Christmas’ use the guise of a lovable character and an enchanting setting to empower children to pursue their dreams, realize their potential and make the most of their unique quirks and ways.

Can Henry Make It – Can Henry Make It is a story following a young kiwi bird that lives in New Zealand and his efforts to understand why he cannot fly like the other birds on the island. Henry is in somewhat of an identity crisis, he is a bird that cannot fly? He is not sure who he really is, or why he isn’t who he is expected to be. With his friend Cable the bat by his side, Henry starts a journey through the island of New Zealand to find the answers to all his questions! Ultimately understanding that he is just fine the way he is! And he doesn’t have to live up to outside expectations. This book is not only for children, but for any age, because it so relatable being in an “identity crisis”. So many of us have gone through them. Henry is here to make that process a little easier.

As the author explains, his books were written to push two very bold and important agendas.

“The first is to create literary awareness. I want children to recognize that reading is a valuable life-tool through which they can be educated, informed and inspired. While statistics show that more and more children are taking up recreational reading, we as adults can still do more to meet our responsibilities,” says Harding.

Continuing, “Secondly, I want children to recognize their dreams and understand that nothing should stop them from following them. My narratives were purposely written to inspire young minds and focus them on developing self-assurance; while finding the positive things in life and holding onto them for good.”

Since their release, both books have garnered a consistent string of rave reviews. For example, Samantha spoke very highly of ‘Can Henry Make It’:

“This is an amazing book! Great message, the characters are adorable…and the story just captivates your hear. Good book for a family reading,” she said.

Momspot.com was equally as impressed, adding, “The characters (Henry and Cable were our favorites) are heart-warming and have quite the lesson to teach about being different.  You won’t be able to stop flipping the pages of this light-hearted show stopper.  The book is a fun read for kids and families alike and teaches a valuable lesson all the while.”

With an abundance of new stories in the works, children can expect many more adventures from Henry and his friends.

Both books are currently available from Amazon:

They can also be purchased from Xlibris.com/bookstore and Barnes and Noble.

About the Author: Born in Minneapolis, Minnesota, Darion Harding holds an Associate in Arts from North Hennepin Community College in Brooklyn Park, MN. Harding has published poetry with the World Poetry Movement becoming a semi-finalist in the international competition. In his early 20’s, Harding began writing poetry, screenplays and short stories. The author’s most recent work in theatre was in 2013. The Other Me, a short play performed at the North Hennepin Community College Theatre in a student play festival.

Harding will be pursuing a Bachelor’s degree in screenwriting at Metropolitan State University in 2013. The young author not only participates in theatre productions, but also earned a “Minnesota Campus Compact Award” for student leadership. Darion lives in Maple Grove, Minnesota and enjoys spending time with his two young nephews, participating in extra-curricular college activities and creating writing projects.