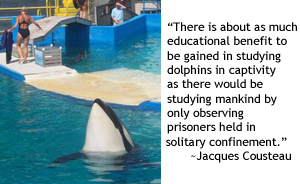 Since I was a young child I had a passion for animals. There was an immense curiosity in me for animals I can’t quiet explain. I admire how animals live in harmony and don’t create wars and kill for land, and how they accept life just the way it is. Humans in the other hand are very different. For many humans success means the failure of others. Some humans have even developed ways in where they can use animals to make money for themselves.  One of the ways they have decided to make money is by providing “Animal Entertainment” for high prices. Animal entertainment is when humans can incarcerate animals (until they are unable to perform anymore, which sometimes means death). One huge example and pretty famous in fact is Sea World. Sea World right now is the company that has more orcas captive than any other company in the world. They have 23 captive orcas at the time all scattered throughout three of their locations; Sea World Texas, Sea World Orlando, and Sea World California. From the 23 captive orcas, five of them are wild caught. Wild caught means they were captured, stolen from their families and then placed in a tank isolated from their home for ever. These unfortunate wild orcas will never be exposed again to their loved ones or ever swim free in their waters again. To me this is heart breaking but to others this is a money making machine. Tons and tons of people go each year to Sea World with their families to watch these magnificent creatures jump and splash right in front of their eyes. These events are truly mind blowing but at the same time they are cruel and inhumane. A lot of us do not know or even begin to comprehend the magnitude of torture these poor marine mammals go through in order to perform. Their whole life is taken away from them. I’ve been reading a lot about Orcas and how they behave in the wild and to my gathering of knowledge I have come to the conclusion that there is no way that a tank in Sea World could even get close to what it would feel to live in the ocean. A tank cannot mimic the wild standards of the ocean, not in this life or the next; tanks are just pools that have the basic necessities to just keep them alive, alive enough to make them perform until they die. Is this the way these animals should live? All their lives confined to a tiny space, a space that will never expand, a space they will never be able to leave. Imagine a human confined to his/her room for the rest of their life, and then been thrown raw meat to survive and supplement vitamins to substitute the lack of food that they can’t provide. How would this human feel? We don’t know he/she only interacts with the team that keeps him/her alive; he/she is only permitted to be exposed to those who “care” for him/her. That’s exactly how Sea World and other companies function, they say people express feelings for animals and they talk for them, but if you think about it, no one can go interview a Killer whale, no one can go up close and see how the killer whale feels. We all follow facts, scientists have placed facts out there for people to read, and people can inform themselves that the healthy living of these creatures will never be justified in captivity. A lot of people won’t agree with me or will try to find some justification to the practice of having animals’ captive, but no matter how you phrase it, animal captivity is horrifying. Just merging myself into that situation makes me shiver, being stolen from where I was born, and forced to perform for the rest of my life just sounds horrifying to me. Not only does this impact wild caught orcas but it also affect the ones that are a product of artificial insemination;  created in captivity. The killer whales that are conceived in captivity suffer a lot as well. So now that I have written about this, I want people to reflect and think about not just the whales but how are humans being allowed to do this. Who’s is given them permission to have animals in captivity in order to provide animal entertainment? Humans have to come together and boycott companies that provide these services, companies that make profit by keeping animals captive for the rest of their lives. The companies rely on us to survive, so if we the customers make the right choice, we can help the whales and shut these companies down. #killerwhales #orcas #captivitykills #seaworldmustclose #iloveorcas #freetheorcas