Typically, I avoid talking about subjects like this outside of my close circle. Abortion is a topic that brings out the raw emotions in people and can tear relationships apart. I’m not hear to talk about my opinions on abortion. I’m here to talk about the importance of having factual information, ESPECIALLY when it comes to topics like abortion.

My cousin and I rarely see eye-to-eye. Wanting to see photos of his family, and keep in touch with him, I’ve maintained a Facebook connection. Typically, when he posts a news article, I quickly scroll away. He could care less if the “news” he reads is biased, or even if it’s factual. If it aligns with his beliefs, he’s happy.

The other day I wasn’t paying enough attention and clicked on the link before realizing who had posted it. It was too late. I forced myself to read through an incredibly biased article on New York’s Reproductive Health Act. I can handle opinion articles – as long as they use factual information. This one DID NOT.

Not only did this media source skew far right, but the author, Ben Marquis, made several inaccurate statements. His claim that:


“Say what you will about Trump, but he was dead-on accurate in calling out Clinton and the pro-abortion crowd for their “unacceptable” position that late-term abortions are “OK,” when the brutal and painful murder of fully-formed unborn babies that are viable outside the womb is most certainly “not OK” by any stretch of the imagination. ”

Ummm…no! That is NOT what is happening, and that is NOT what this law allows. If Ben had done any kind of responsible research on the topic, he would have learned that in the event of late-term abortion (preformed due to the risk of the mother’s life or the absence of fetal viability), a live birth is extremely unlikely. In the event that a live birth does occur:


“The RHA does not change standard medical practices. To reiterate, any baby born alive in New York State would be treated like any other live birth, and given appropriate medical care. This was the case before the RHA, and it remains the case now.”

Spreading outright lies is not only a bad practice for journalists, it’s dangerous. Misinformation is spreading like wildfire in today’s world. I hear quite a bit about attempts to unify our country. The only thing fake news is going to accomplish is create a bigger rift.

In this article I found the media source did not have credibility and was giving false information to his audience. The article talked about the recent school shooting that had the United States public opinion talking about gun control. There were many different opinions the surfaced in this conversation. In this article the author stated that Trump had made a statement that he was going to stop all school shootings by banning all schools. This authors statement was false from what president Trump’s actually response statement was to the recent school shooting and gun control conversation. The author made no point to establish credibility and made a very irrational comment that logically makes no sense. I believe he should have did his research on what President Trump’s actually response was to the situation and not just making irrational statment that was false. The article creates attention because of the statement but loses the audiences favor because of the false information.

There has always been the existence of inaccurate and biased reporting. We can go back to biblical times, and even Pope Francis recently said that in the Old Testament was the first of “fake news”. However, today it seems like there’s been a complete breakdown in the news and media industry, including new media such as blogs, and the floodgates have opened on “fake news”, to the point where it’s becoming harder to know which information is completely real or merely partially real.

Despite the staggering amount of inaccurate and biased reporting occurring these days, nothing could be more terrifying than when the highest office in the country is the one creating the misinformation. On January 21, 2017, then-White House press secretary, Sean Spicer, stood in front of the media and challenged them that they had wrongly reported the audience numbers for President Trump’s inauguration. Spicer stated, “This was the largest audience to ever witness an inauguration, period, both in person and around the globe.” 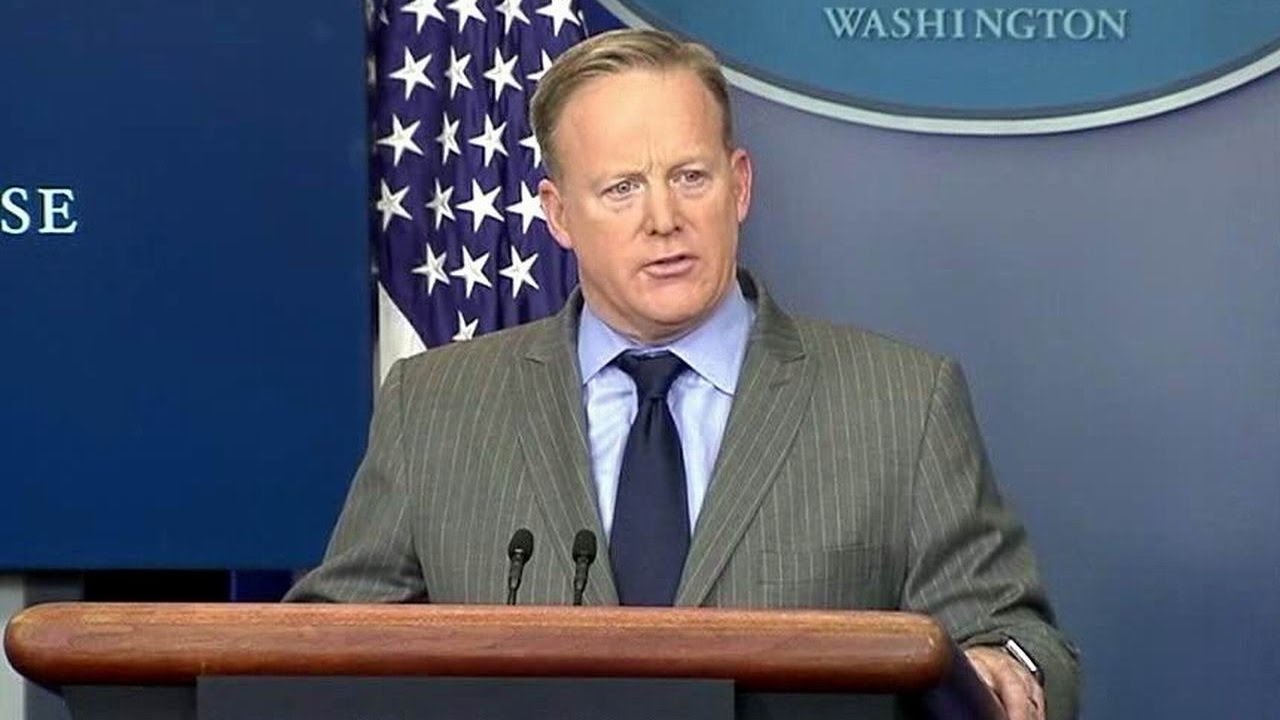 Spicer lied right in the faces of journalists and essentially the world, saying that the in-person and broadcast audience numbers were the highest of all time. We all knew then, and we still know now, that the Trump administration’s assertions were flat-out wrong, on both counts. The data didn’t back up their claim.

In addition to the horror of our government boldly lying to the public, particularly on such an insignificant matter, the more troubling fact is that this government refuses to admit when they are caught in a lie. In my opinion, they seem to have a policy of “lie and deny”.

I have to admit that as much as I detest this strategy, it’s almost brilliant in some crazy way. Think about it, no matter your position on a subject you can win any debate if you just say you don’t agree with the opposition’s information and continue to repeat that. When presented with facts, challenge from where the information came. Also, create fake reporting to support your misinformation. With these tools, you will never lose an argument again.

This article kept popping up in trending news, so I had to check it out. It sounded so ridiculous, and of course it is. But people keep sharing it. See the headline, hit share- isn’t that how it goes? Not reading the actual article, but buying into the new habit of mistaking a headline for credible news, when it’s anything but. I can’t emphasize enough that people should click on these links before jumping to conclusions.

With the title of NaturalNews, the site claims to be “The world’s top news source on natural health.” So now we have a supposed natural health site claiming to be the experts on calling out fake news. Fantastic. One quick look at the page reveals liberal conspiracy theories intermingled with breastfeeding tips. If someone does click the link and still somehow determines that this is a legit news site and then shares it, that just aggravates the issues.

Curious about what else this site promotes, I clicked on this article: Did you fall for the “18 school shootings in 2018” fake news hoax? It’s a complete lie pushed by the dishonest left-wing media that hates America. One quick look at the title alone shows the strong bias and intention to sow distrust. But how many times will this headline be shared? And how much division will it cause?

Deep political division, Russian bots, fake news. We need to be careful more than ever what we are sharing. Check the source, cross-check the story. It’s so much easier to just hit the “share” button. But along with this easy source of news comes the responsibility not to use it to spread false claims. Opinions are opinions, and facts are facts. And in this case, the fact is that NaturalNews is more the site administrator’s opinions than anything else.

Our country is deeply divided, and jumping to conclusions based on mislabeled news headlines certainly doesn’t help. Stop. Read. Think. Question. Cross-check. If it seems credible, feel free to share. If not, keep scrolling. Maybe share some puppy videos. I think we’d all rather see cute happy puppies, right?

I have several issues with MediaTakeOut but more specifically the category MTO NEWS. Fake news is a problem and they take it to a new level. The MediaTakeOut site is full of gossip and even that is unreliable. It claims to be the most visited urban website in the world, that makes the idea them delivering unreliable “News” even more disturbing.

The first thing that is listed on their “News” page is their MTO SUPER WORLD EXCLUSIVE that is telling us celebrity Rihanna is pregnant and they have PROOF! The post said she is DEFINITELY pregnant and they can prove it because “her NOSE IS SPREADING”. They say they witnessed her go out and she wasn’t drinking or doing drugs. Beyond the fact that they do not make me confident in their sources, by chance the news could be true. If it was I still wouldn’t believe this website. The site uses bad grammar and has spelling errors stating that she “Also she DIDN’R SMOKE WEED.”

So why be outraged, it’s just a rumor right? Well after scrolling down I see a post about people being mean to Beyonce’ and then an explicit post about a possible rape. The post about the rape has a video of the incident occurring. I have removed the hyperlink below because I believe the content is unethical.

SHOCK VIDEO: New VIRAL VIDEO Shows EXTREMELY INTOXICATED Girl . . . Getting A TRAIN RUN ON HER In A Parking Lot . . . And People Online Are ASKING . . . Is This A RAPE????

I want to reflect further on this for a second. I think that they could have potentially used this terrible event to create awareness. But re-posting the pornographic non-consented footage wasn’t the way to do that. The thought provoking question is questioning rape culture but they don’t seem even aware of such thing.

This site has links to share these outrageous posts, further perpetuating the fake news, and sexual assault. This platform could be used to engage with the urban community and organize for social change. Instead it is making many false claims and damaging the minds of the people who do not think critically enough to fact check.